“The Quintland Sisters” Is A Story Of French Vs. English; Catholic vs. Protestant; Rich vs. Poor; and Lowly Peasant vs. Eminent Doctor

Before The Real Housewives, The Bachelor, or Survivor, there were the Dionne quintuplets: five tiny miracles born to French farmers in Northern Ontario in 1934. Set in the midst of The Great Depression, and leading up to World War 2, The Quintland Sisters follows Emma, a 17-year-old midwife-in-training assigned to the quints who finds herself in the middle of a media circus.

At the time, quints (who had a 1 in 57 million odds of even being born) had never survived. Born to a couple with five children already, once word got out about the girls’ arrival, crowds (including reporters) gathered around their little farmhouse.  Eventually, they were signed over to be wards of the state and the government removed them from their francophone parents, making them wards of the British kind, with Emma signing on as their nurse. We follow her journey with the quints through private journal entries, correspondence with friends, and newspaper articles sprinkled throughout the book, starting with their birth and including a train trip back from meeting the Queen of England in Toronto.

It’s as much a story of French vs. English; Catholic vs. Protestant; Rich vs. Poor; and Lowly peasant vs. Eminent doctor, as a young woman trying to find her place in the world and an allegiance to these dazzling sisters who consider her their safe place. 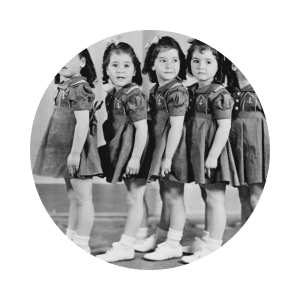 Facts With A Side of Disbelief

Interwoven are facts that would make you shake your head in disbelief, such as: the girls would play in a special playground built for public viewings that would be open half an hour at a time, which included a turnstile with an automatic counter to tally the day’s visitors; their parents could only visit during allotted hours, and guests were prone to taking stones around the nursery as they were said to possess a quality of fertility.

Throughout the novel, we journey with this young woman who starts out awkward (“I’m not even a question of being unattractive. I’m simply invisible.”) and who, after encountering a violent incident on the train, transforms into a self-assured woman ready to use her talents and pledge allegiance to her true love.

Will she survive the brutality? Will she finally be able to admit her feelings for her patient suitor? Will she be able to come to terms with Quintland and the destruction it wreaked in the lives of the quints and those who “loved” them?

You’ll just have to read to find out.

This book is heavily researched and, if not a true story, would be one that’s hard to believe. I enjoyed this coming-of-age story; one that also shines a light on one of the strangest true stories of the past century.

Is there a book you’d like to see featured in The Journal? Let us know by emailing us here!

Favourite book: To Kill A Mockingbird by Harper Lee

Favourite brunch spot: Anywhere I don’t have to cook.