In Serpent & Dove, Clandestine Witch Lou Must Hide Her Magic, Even from Her New Husband

Set in a new world called Belterra, Serpent & Dove follows a witch named Lou that leads a life of crime in order to survive. Belterra, a city with a French flair, is not welcoming to witches; the king employs Chasseurs, or witch hunters, who work tirelessly to root out witches and burn them at the stake. After a series of unfortunate events, Lou is forced to marry a Chasseur named Reid. Now Lou must work even harder to hide her powers from the enemy in her bed.

As is common with this trope, Lou begins to learn more about Reid and understand that not all Chasseurs are the same. Through their often bitter interactions, we start to see Lou soften a bit as she realizes that Reid is generally concerned about her well-being, something she’s been missing since her mysterious departure with her mother. Trying to keep her secret from Reid is not only a logistical issue but also becomes a moral one. How can she tell her husband, who she’s starting to fall for, that they’re sworn enemies without endangering her relationship and her life? Mahurin unwinds this knot with expertise and intrigue. 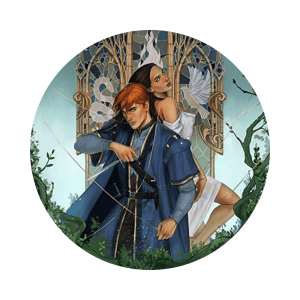 A Witch-Hunt with a Romantic Twist

Before going any further, I should warn that this is definitely a more mature YA novel. With some descriptive violence and a pretty explicit sex scene, this novel is better suited for more mature readers. That being said, Mahurin does not indulge in these topics lightly; both the violence and passion serve legitimate purposes. Lou is a complex addition to the growing number of strong female characters in YA and is true to herself even as she begins falling for Reid. While Reid is chivalrous, he’s not the oft-depicted airhead of the pair. He must come to terms with his dogmatic beliefs while also learning what it means to be a compassionate partner. This story is action-packed, magical, and full of surprises.

I couldn’t put this book down. Not only was I intrigued by the magical aspects, but the relationship between Lou and Reid was completely compelling. Both characters were able to reckon with their pasts and learn to grow without being lost in each other, something not all YA authors accomplish. I was also totally enraptured with the French-esque setting and the seamlessness of the witchcraft. The world-building is both admirable and natural. Also, the violence and more mature romance felt natural for the characters and added to the drama and stakes. If you’re looking for an exciting, more mature YA fantasy novel, this is for you!

A Social Isolation Reading List: 33 Books That Will Inspire & Uplift You