Folk of the Air series by Holly Black (1104 pages)

Folk of the Air series by Holly Black (1104 pages)

After a decade of living in the treacherous High Court of Faerie, Jude wants nothing more than to belong among them. Yet, she’s mortal, despised, and powerless–except for her ability to lie. No one hates Jude more than Prince Cardan, the youngest son of the High King, and the wickedest. And Jude returns the favour, hating him more than all the others. When she defies Cardan in an attempt to win a place at Court, she becomes trapped in a vicious game. To survive, she must prove she can be as cunning and heartless as the Fey themselves. But as violence tears through the Courts of Faerie, it becomes less about her own survival, and more about saving her siblings, and Faerie itself. 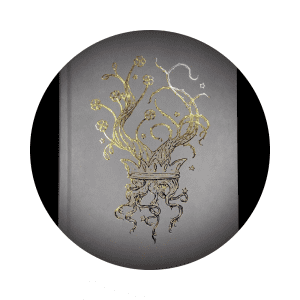 Jude is a sharp-as-metal mortal, forged by Madoc, who slaughtered her parents and brought her to Faerie when she was seven years old. In that sense, Jude was hard to relate to, but that was part of her appeal. She’s determined not to be a puppet like mortals before her, and to find her place in Faerie. Basically, Jude craves power. The descriptions are fit for a fantasy, but it’s not all beauty and wonder. These faeries are darker, crueler and, dare I say, Grimm-like. Black chooses her words wisely, evoking an otherness that constantly had this mortal reader on edge, suspicious yet mystified. The way the faeries speak—vague and careful, because they cannot lie—juxtaposes beautifully with Jude’s blunt human sarcasm and lies.

The Folk of the Air series is a beautiful and brutal tale, chock-full of betrayal and surprises. The story moves at a blistering pace, but I never found it hard to keep up with its twists and turns. You’ll stay up late to devour this entrancing tale, and when you do drift off to sleep, you’ll dream the dark has teeth—cruel and wicked, but as regal as a queen.

Our Top Picks of 2020: The Hottest Books on Climate Change and The Environment