May the 4th Be With You: Five Great Star Wars Novels to Help You Celebrate

Royals, Rebels, and Scoundrels: Heroes Worth Celebrating
Home  |  Best Of The Journal   |  May the 4th Be With You: Five Great Star Wars Novels to Help You Celebrate

May the 4th Be With You: Five Great Star Wars Novels to Help You Celebrate

While the official origins of Star Wars Day are hotly debated, May the 4th has brought joy to Star Wars fans for decades. The date was chosen for its similarity to the phrase “May the Force be with you”, something all Star Wars fans are familiar with. For those of us fully steeped in the Star Wars galaxy, the extended universe is not only vast but also brings us great joy. For those new to the galaxy, things can get a bit overwhelming.

If you’re looking to start in on some Star Wars novels, or looking for titles you may have missed, this list has something for everyone. While many of the older Star Wars novels were written explicitly for adults and were a bit more dense, this list includes some of the best Star Wars novels written for a YA audience. These novels have strong young characters who are not only trying to find their place in the galaxy but are also often fighting the oppressive Empire or First Order. These characters use their innate skills to fight for the Light while often finding strength they didn’t know they had. 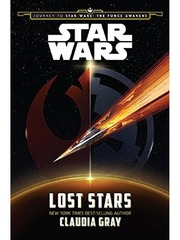 Spanning the entire original film trilogy, Lost Stars tells the story of Ciena and Thane, two friends who grew up on the same planet but found themselves on opposite sides of the war. Both grew up dreaming of becoming pilots (a common dream in the galaxy) and joined the Imperial academy. As their training intensifies, so does their burgeoning love for each other. But as Thane learns more about the Empire’s true dealings, he realizes that he’s chosen the wrong side. Unable to convince Ciena to come with him, Thane joins the Rebellion even though doing so puts him in Ciena’s crosshairs.

Who Should Read It

Lost Stars really is a crowd-pleaser. Both characters are fully developed and sympathetic which makes choosing sides as a reader incredibly difficult. Gray does an excellent job of making the allure of the Empire real and understandable so readers can genuinely feel for Ciena. Also, most Star Wars fans start with the original film trilogy as their entry point. This novel takes place throughout all three original films and includes a number of Easter eggs for fans. If you’ve seen the films, this is a great entry point because the story includes so many events mentioned or depicted on screen. And even though Thane and Ciena feel real love for each other, the story is not overwhelmed by romance. It’s a great combination of love, dreams, and moral ambiguity. 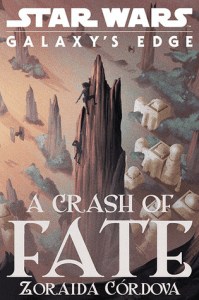 Izzy and Jules spend nearly all of their time together as children. But when Izzy’s family suddenly moves, Jules is left alone on Batuu, a remote planet in the Outer Rim with few prospects. While Jules learns to farm, Izzy’s parents are murdered forcing her into the world of smuggling to survive. Years later, a dangerous job brings Izzy back to Batuu and she, of course, runs into Jules. Their connection is as strong as ever, but Izzy doesn’t want to bring Jules down the perilous path she’s chosen for herself. Set during the events of The Force Awakens, this novel shows the choices that everyday citizens must make to survive in a galaxy controlled by the First Order.

A Crash of Fate is similar to Lost Stars in many ways. In both novels, we follow two young people just trying to survive under the control of the current regime. If you’re interested in characters who choose to break the law in order to survive, then Izzy will definitely appeal to you. But we know she’s not all bad when she hesitates to risk Jules’s safety by bringing him along. This novel is both tender and fast-paced! 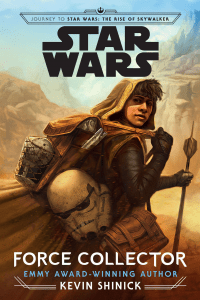 Force Collector follows young Karr during the time just before The Force Awakens. Although the Jedi have slipped into myth, Karr is still fascinated by them. Karr spends his free time searching for relics from the past. But when Karr picks up these objects, he can often feel the history of these relics. Along with his new friend Maize and his droid RZ-7, Karr sets out on an adventure to learn more about his mysterious ability.

Who Should Read It

What I really like about this novel is the idea that the Force is not only multifaceted but also is not something only the Jedi can tap into; this was an idea heavily implied in The Last Jedi. Karr’s ability is not something we’ve seen before and is an interesting way for both him and readers to learn more about the past. Karr’s friendship with Maize is heartwarming and RZ-7 is another lovable droid. If you’re looking for a novel that’s more related to the Jedi, this one’s for you. 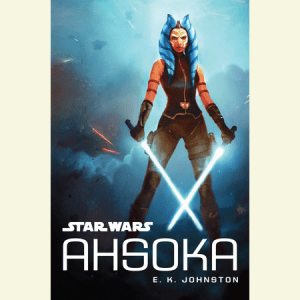 Since the end of season six of The Clone Wars, fans had long wondered what happened to Ahsoka Tano, Anakin Skywalker’s padawan. E.K. Johnston has finally filled in those blank spots. Several years after leaving the Jedi Order and surviving Order 66, Ahsoka is hiding from the Empire on a moon called Raada. But when the Empire starts to take control of the simple farming community she’s joined, Ahsoka finds that she must act. Will Ahsoka be able to protect her new friends without revealing her former identity as a Jedi? You’ll have to read to find out!

The Clone Wars, an animated series that takes place between Attack of the Clones and Revenge of the Sith, is not only wildly popular but also genuinely beloved. We get to watch Anakin truly grow into his own and learn to lead and love; this makes his eventual fall even more tragic. While The Clone Wars includes many characters we’ve seen in films, Ahsoka was a brand new character that really steals the show. She’s eager, brave, and never afraid to question the teachings of the Jedi. In this novel, Johnston does an excellent job of translating Ahsoka from the screen to the page while also showing that she’s learned and grown in the years since we last saw her. We’re also getting more of her story in the final season of The Clone Wars airing now! 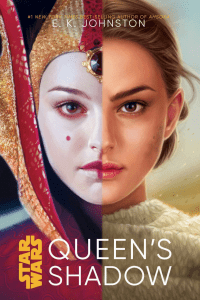 When we first drop into The Phantom Menace, we meet Queen Amidala of Naboo. Viewers are immediately intrigued by her elaborate costumes and series of handmaidens that never seem to leave her side. As we see more of Padme, we learn that these handmaidens are not only there to help her dress but are also her first line of security. E.K. Johnston pulls back both the literal and figurative veil that obscures this prestigious position in Queen’s Shadow. In this novel, we meet Padme recently after being elected as she learns about the skills her handmaidens possess as well as the protections hidden in her ostentatious costumes.

Regardless of your personal opinion, we can all agree that the prequel film trilogy is a bit maligned. The novels about this era, though, give fans greater insight and depth into these foundational and often fraught times. Padme’s political prowess isn’t really explored in the films but Johnston helps expand our understanding of her as an individual rather than simply the object of Anakin’s affection. Check out this novel if you’re looking for some political intrigue.


Rebellions Are Built on Hope

While there are typically many ways to celebrate Star Wars Day, this year’s list is a bit more limited due to public health concerns. But reading is something that definitely is not cancelled! These titles combine the depth of the older novels with a modern YA sensibility. You’ll find characters that are complex and relatable who will also make decisions you’ll shake your head at. While you may not be able to spend May the 4th at local conventions or having an in-person marathon with your friends, you can still pick up any of these books and instantly be transported to that galaxy far, far away.

Looking for more great recommendations? Check out The Journal!