Pepper is a chronic overachiever who’s juggling school, swim team, and tweeting for her parents’ fast-food chain, Big League Burger. Jack plays second fiddle to his popular twin brother, spends his afternoons at diving practice, and his evenings working at Girl Cheesing, the deli his family owns. When Jack discovers Big League Burger stole his grandma’s iconic grilled cheese recipe, he calls them out online. As the rivalry between Jack and Pepper’s parents’ restaurants catapults into an all-out Twitter war, they also go head-to-head over pool time. But while they’re battling in public, Pepper and Jack are also unknowingly falling for each other on an anonymous chat app that’s sweeping their school. 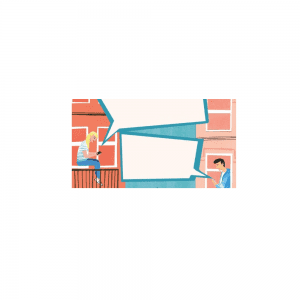 A Romance As Cute As Their Couple Name

Most romances have the characters interacting in one, maybe two, different ways. But in Tweet Cute, Pepper and Jack are getting to know each other in real life (through arguing over pool time), online (via waging a Twitter war for their parents’ brands) and without knowing it (via an anonymous chat app). While that may seem like a lot for an average-sized novel, Lord balances these aspects well. She drew me into Pepper and Jack’s lives simply by writing them as well-rounded characters laden with snark and angst. And she doesn’t stop at their love story, but includes family drama and future woes as well (including the classic ‘what to do after graduation’ dilemma).

While this romance has a lot going on, the depth works in its favour. It’s adorable, smart, and engrossing. Add this one to your list if you love snarky romances with endless banter and want to dive into a fun New York City story.

The Girl with the Louding Voice by Abi Dare (384 pages)