The Darkening by Sunya Mara (400 pages)

The Darkening by Sunya Mara (400 pages)

Vesper Will Do Anything to Save Her Father in The Darkening

The eye of a cursed storm threatens their city, and their only hope lies with the daughter of failed rebels and a prince who doesn’t want his throne. Vesper Vale lives in the shadow of her parents, revolutionaries who couldn’t accomplish their goals. When Vesper’s mother was captured by the queen’s guard, she had to choose between death by beheading or walking into that same storm surrounding the city. Twelve years later, Vesper learns that her father is still on the run and will do whatever it takes to save him.

Vesper gears up to find her father before the guards and needs some help if she’s going to win. She turns to her father’s book of dangerously untested magic. Vesper even plans to gain access to the prince’s coven of sorcerer soldiers. She even tries to endear herself to Prince Dalca, who she learns isn’t the cold-hearted royal she thought he was. With so many layers, the game Vesper is playing is incredibly precarious and she knows she could end up sharing her mother’s fate. 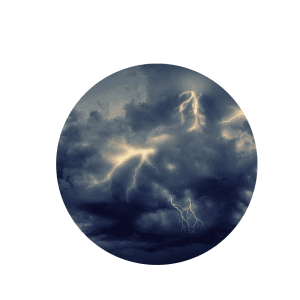 Complex Characters and a Unique Antagonist

Fans of George R. R. Martin’s works know how intriguing morally gray characters are. Mara develops her own unique characters with subjective opinions about right and wrong. These complex characters make for more realistic conflict and add a sense of uncertainty regarding their decisions. Because several of the characters have such strong motivations, they are sometimes blinded by those goals.

The concept of a magical, cursed storm surrounding a city is something I haven’t come across anywhere else. While I would’ve liked more worldbuilding to flesh out the workings of the storm and the magic in Vesper’s father’s book, we got enough information to get into the world. I look forward to learning more about the fantasy elements of the story in the sequels to follow.

Mara’s The Darkening is unique and moody, as the title implies. The pace, while inconsistent at times, drives the story in such a way that it feels shorter than its actual page count. Because the world is so different, even from traditional fantasy settings, I wanted  more opportunities to learn about the magic and maleficence of the storm. Overall, I’d recommend this book for any fantasy fan, especially ones who enjoy series which this will eventually become.