I’ve been a thrill-seeking, mystery hunting, spine-tingling suspense obsessed reader ever since I was a child. Nancy Drew, Dean Koontz, Stephen King and Patricia Cornwell were always close at hand and filled my bookshelves from latency into adulthood.

As a 40-something thrills and chills reader, I’ve found a new sub-genre – Nordic noir!

I began reading Nordic authors in the spring of 2020 at the beginning of Canada’s Covid quarantine. I was a complete newbie to Nordic noir and now there is no going back!

Nordic noir combines the very best of the thriller and suspense genre with dark, slow, smouldering plots that sear into readers, leaving indelible impressions well beyond their final pages. They are twisty, psychological mind-benders that play on relational dynamics, the need for connection and our fear of the extreme depths of human behaviour and pathology. The Scandinavian culture and frigid, breathtaking terrain amplifies the tension and intrigue that is imbued into each layered plotline and character. The result? An immersive and cerebral experience!

Readers simply can’t walk away once they dive into Nordic noir. It is uniquely different in its presentation and pace and its unapologetic absence of tidy conclusions. Life is messy and Nordic noir is a nod to life’s reluctance to hand out pretty bows. And I’m here for this real and gritty genre!

In a recent interview, Ragnar Jonasson, author of the Hulda Hermansdottir trilogy and the Dark Iceland Series, stated that he felt much of the “noir” in Nordic fiction can be attributed to authors penning stories in the long, dark and harsh winter months. Perhaps the climate enhances the foreboding feel providing the perfect atmosphere for authors like Ragnar Jonasson, Jo Nesbo, Camilla Läckberg, Lars Keplar and Yrsa Sigurdardottir, just to name a few!

We begin our journey in the cold, harsh and deeply intriguing terrain of Iceland with Yrsa Sigurdardottir’s The Children’s House series – The Legacy, The Reckoning, The Absolution and Gallows Rock. Yrsa has won countless awards for her work, as an international bestseller and is referred to as “Iceland’s Queen of Crime,”

Yrsa’s ability to create rich protagonists alongside compelling antagonists is complimented with her unique slow burn styling and robust investigative procedural knowledge. The Children’s House series was a great starting place for me and for other Nordic noir newbies. It’s a smart, dark, steely and twisty series that will keep you on your toes!

The Legacy by Yrsa Sigurdardottir (480 pgs) 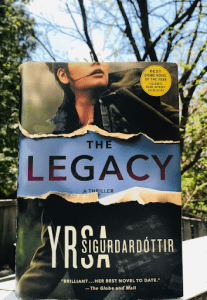 The Legacy is the first book in the Children’s House series by Yrsa Sigurdardottir. This was my first real introduction to Nordic noir and it did not disappoint! Set in Reykjavik, Freyja, a child psychologist specializing in trauma and victim services, and Huldar, a newly appointed lead investigator, head up the daunting task of finding a vicious killer. While the tale begins in 1987 following a horrific event leaving three siblings orphaned, the bulk of the story takes place in 2015 when a young mother is brutally murdered. The only witness is the seven-year-old daughter who they find hiding under her mom’s bed.

At 480 pages, this book has both meat and teeth. The plot includes cryptic messages, family secrets, crime and grime. It is an intelligent read that has readers engaged in a deep dive into the minds of the troubled, overlooked and broken.

The Reckoning by Yrsa Sigurdardottir (384 pgs) 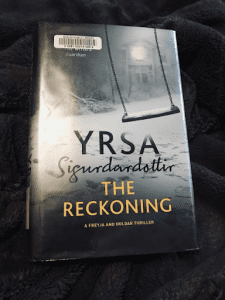 In the second installment, The Reckoning, Freyja and Huldar find themselves once again working together. This time they are investigating a murder whose killer has left a cryptic and chilling note written by a child ten years ago that predicts the death of six people. The only clues are the initials. As the deaths are uncovered, Huldar and Freyja set to work decoding the note and tracking its author. With a combination of gritty police work and compelling psychological profiling, the two create a formidable team.

The novel’s 400 pages seemingly turn themselves as we search to uncover who the initials belong to before they are revealed at the scene of their murders. Drawing on trauma and abuse, The Reckoning, in The Children’s House series, is a riveting take on the darkness that can consume tortured souls and the lengths they will go to, to rebalance the scales of justice.

The Absolution by Yrsa Sigurdardottir (386 pgs) 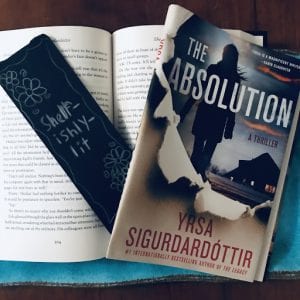 The Absolution is a compelling third book to the psychological thriller series. In this book, Yrsa draws inspiration from modern social media and popular apps as the vehicle for this installment’s gritty crime. Bullying and online harassment are at the core of The Absolution with Yrsa offering insight into the bully, the victims and those wishing to enact revenge. The Absolution is both relevant and completely relatable. We would be hard-pressed not to know someone impacted by bullying or the perils of social media that can heighten these experiences and leave young people vulnerable, isolated and feeling helpless.  But what if the traumatized had the chance to take back their power using the very app that haunted them?

The Absolution is gripping from its beginning and ends with dizzying results. There are no tidy conclusions to be found, guaranteeing readers will continue to reflect on this novel and its contemporary themes of bullying, trauma, social media and the impact on our broader global community. 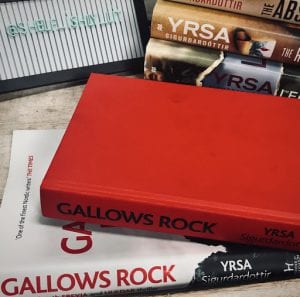 The fourth and final book in The Children’s House is Gallows Rock! Yrsa returns with duo Freyja and Huldar, who team up one more time to help find a child’s family who is inextricably linked to a suicide turned homicide.

In Gallows Rock, Yrsa infuses her knowledge of social media, pitting it against the false sense of security we place in our perceived internet anonymity.

The result: a cautionary tale highlighting that nothing is ever truly deleted. For even the deepest, darkest and most disturbing recesses of the web can’t bury all for long.

I appreciated the contemporary content and context that Yrsa employed but wanted more – mostly of Freyja and Huldar who I have grown to love both as individual characters but also for their unique chemistry! Alas, I will have to employ patience. I have a feeling there will be more to come in The Children’s House series – and I’ll be here for it!

The Children’s House series is a dark, twisted and psychologically compelling series. The Legacy was voted as “Best Crime Novel of the Year” by the Icelandic Crime Authors Association. The Legacy, The Reckoning, The Absolution and Gallows Rock are all international bestsellers.

Readers will be transfixed by Yrsa’s ability to transport you to Iceland and into the worlds of Freyja and Huldar. It will have you holding your breath all the while searching and grasping for pieces that connect the series of horrific crimes. The books are slow but smouldering burns that will engulf readers to its final pages and blindsiding conclusions.

While my journey with Freja and Huldar has seemingly come to an end, this is merely my beginning. I plan on scouring the shelves of bookstores to continue my love and obsession for Nordic noir. In fact, I’ve already begun my newest series, which I will feature in the next installment of Nordic noir!

Next up is Ragnar Jonasson! Ragnar has two series that I have been completely captivated by and I am so excited to share them with you! I’ll be posting individual book reviews on my personal Instagram page then compiling my thoughts for an in-depth overview for BooknBrunch and The Journal.

Want to be the first to know when the next installment is live? Subscribe to our weekly newsletter!