Rowan Roth and Neil McNair have been rivals throughout high school. They’ve clashed on test scores, student council elections, and even gym class pull-up contests. On the last day of senior year, Rowan intends to beat her nemesis once and for all by being crowned valedictorian. But in the morning assembly, it’s Neil who wins the honour. Fortunately, there’s still one last fight: Howl, the senior class game that takes them all over Seattle. After play starts that afternoon, Rowan and Neil learn a group of seniors is out to get them, so they reluctantly team-up. As she spends more time with Neil, Rowan realizes he’s much more than the awkward and frustrating nerd she’s sparred with for the past four years. And as the day turns to night, she finds they have more in common than she ever thought possible. 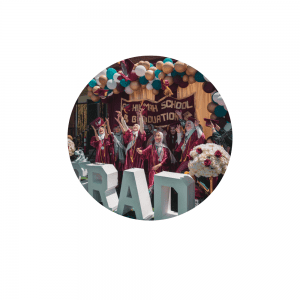 Today Tonight Tomorrow zooms in on two rivals at the top of their class, and presents them as stark opposites. (If you’re counting tropes, that’s two so far and a couple of the best ones in my opinion.) The story really starts after Rowan loses something she always wanted, and throws herself into her last chance to beat her rival before they go their separate ways. In a surprising turn of events, Rowan decides to team up with Neil. While they’re temporary allies, they get to know each other more than they ever did over the course of the four previous years. And, surprise! they have more in common than they both thought possible.

If you’re looking for something light-hearted that still has serious undertones threaded through it, I’d like to hand this one to you (maybe a little forcefully). As the story builds, Rowan has revelations not only about the past four years and her rivalry with Neil, but about the future and what it holds for her. Also, the story has great Jewish representation which gives the reader a small window into what it means to be Jewish today. Both Rowan and Neil grow throughout the story (even though it takes place over the course of one day!) and while the ending feels predictable, it isn’t as easy as it seems.

Today Tonight Tomorrow is a near-perfect enemies-to-lovers tale. I adored that Rowan is not only a book nerd, but a writer as well. Pick this one up if you want to step off the page and into Seattle, or if you want to dive into a story with strong, dynamic characters and a sweet romance.